On April 30, 2020, in the United States District Court Southern District of New York ,civil action was authorised by the governing body of Jehovah’s Witnesses against the Truth and Transparency Foundation and its founders over allegations of breaches of copyright laws.

ACCORDING TO THE COMPLAINT

Watch Tower Bible and Tract Society of Pennsylvania, by its attorneys, Cowan, Liebowitz & Latman, P.C., for its Complaint against Defendants The Truth and Transparency Foundation, Ryan C. McKnight, and Ethan G. Dodge alleges:

1.This is a civil action for copyright infringement in violation of the Copyright Act,17 U.S.C. § 101 et seq. This litigation seeks relief against the ongoing wholesale infringement of Plaintiff’s registered copyrights in 74 original motion pictures. Defendants, without authorization or permission from Plaintiff, have made unauthorized copies of Plaintiff’s motion pictures, and are reproducing, publicly displaying, publicly performing and distributing Plaintiff’s works online. Plaintiff, accordingly, seeks injunctive relief and statutory damages for willful copyright infringement.

12. Watch Tower over decades has created and published thousands of original works of authorship, including literary works, works of visual art, musical works, and motion pictures, and has secured over 3,300 federal copyright registrations for its original works. Under the Copyright Act, Watch Tower has the exclusive rights, among other things, to “reproduce the copyrighted work[s],” to “distribute copies or phonorecords of the copyrighted work[s] to the public,” and in the case of its “motion pictures and other audiovisual works, to perform the copyrighted work[s] publicly,” as well as to authorize or license others to engage in such activities. 17 U.S.C. § 106.

13. In mid-2018, Watch Tower learned that 487 of its copyrighted literary works were being reproduced, displayed and distributed without license or permission by Defendants on the faithleaks.org website.

15. Defendants, through counsel, declined Watch Tower’s demand that its literary works be removed from the faithleaks site. Defendants did not contest Watch Tower’s ownership of valid copyrights, or its prima facie case of infringement of those copyrights, but instead asserted “the defense found in 17 U.S.C. § 107,” claiming that Defendants’ wholesale reproduction and distribution of complete works, unaltered and unaccompanied by new matter, was protected as fair use.

16. In May 2019, Watch Tower learned that a large number of motion pictures created by Watch Tower, including the 74 motion pictures at issue here, had been uploaded to and made available for public performance on Rutube, a Russian online video streaming service located at rutube.ru and available to users worldwide.

17. Watch Tower submitted to Rutube notices of claimed infringement, objecting to the unauthorized posting of its copyrighted works on the Rutube site and demanding their removal. In response, Rutube removed the Watch Tower videos from its site.

18. Shortly thereafter, Defendants posted the Watch Tower videos that had been “taken down” from Rutube to Defendants’ faithleaks.org site.

19. In a May 2019 article titled “2019 Jehovah’s Witness Convention Videos Published Again After Successful Takedown Request,” published on Defendants’ truthandtransparency.org website, Defendants boasted not only about their past infringements and refusals to comply with Watch Tower’s efforts to enforce its copyrights, but also about these new infringements, leaving no doubt as to Defendants’ willfulness.

20. The Watch Tower videos remain available on the faithleaks site to the present day.

The United States District Court for the Southern District of New York has published, as part of court proceedings, a copy of the newly revised secret Jehovah’s Witnesses elder’s manual ‘Shepherd the Flock of God’.

Among those targeted through 60 DMCA subpoena legal actions, commenced in the Federal Court by Watch Tower Bible and Tract Society of Pennsylvania, Inc. and subsidiary corporations, was JW LEAKS who are not involved in these current proceedings.

On April 15, 2020 in the United States District Court for the Southern District of New York, in the matter of DMCA Subpoena to Google, LLC, Case No.: 7:20-mc-00119, a ‘Supplement in Support of the Motion to Quash DMCA Subpoena’ was filed by anonymous Jane / John Doe which included a full copy of the recently revised version of the Jehovah’s Witnesses elder’s manual, ‘Shepherd the Flock of God’.

“The Court will not accept any further filings except Watch Tower’s 4/17/20 submission and Doe’s 5/1/20 response. Any other filings will be disregarded, so do not bother sending any.”

According to Utrecht University, the academic study commissioned by the Dutch Ministry of Justice and Security:

The study was commissioned by the Research and Documentation Centre (WODC) of the Ministry of Justice and Security, which requested a study be conducted in response to a motion of the Netherlands House of Representatives submitted by Van Nispen et al. (Motion 31015 no. 154). This motion served as main impetus for the WODC and the research project.

On 23 January 2020, the Ministerie van Justitie en Veilgheid (Ministry of Justice and Security) issued a internal government letter which presented and summarised the history of the report and the attempts by Jehovah’s Witnesses to suppress the report. In the letter, De Minister voor Rechtsbescherming, Sander Dekker, wrote:

“The report on willingness to report within the community of Jehovah’s Witnesses paints an extremely worrying picture. The investigation shows that there are reasons to believe that making a report is hampered by the closed nature of the community and the risk that the victim will be released. According to the respondents, the problems in dealing with reports of sexual abuse are also related to the closed culture of the community of Jehovah’s Witnesses. The research shows that elders of the community are strongly focused on keeping the community together by reconciling the perpetrator and the victim. The result of the experienced way of handling the report is that this leads to secondary victimization. Victims feel insufficiently heard, ignored, stigmatized and isolated.

“I expect every board of an organization, including the community of Jehovah’s Witnesses, to show signs of sexual abuse, to make every effort to prevent sexual abuse. This is especially true with regard to children. As Minister for Legal Protection, it strikes me that so many vulnerable victims felt that they were on their own, had not experienced recognition, and had not, or only recently, found their way to justice and official aid agencies.

“Following the report, a discussion has recently taken place at my ministry with the board. In addition, the board was urged to actively take up the recommendations from the report. In particular, it was about setting up a hotline within the community of Jehovah’s Witnesses where victims of (alleged) abuse can go.

“To my dismay, the board responded negatively to this. Instead of focusing on creating more openness and recognition for the position of victims within the community, it denied the need for this. In the meantime, the board has spared no time, resources or effort to prevent publication of the report. However, in the summary proceedings that were submitted to that effect yesterday at the Midden-Nederland District Court, the administration has been unsuccessful. For the Board’s complete response to the report, I refer you to the appendix.

“Now that the reports are public, I want to call on the board to adopt the recommendations from the reports in a last intrusive conversation. After all, change prompted and propagated by the Community of Jehovah’s Witnesses themselves is the most effective. This is independent of the possibilities that the government has in terms of legislation and official assistance to be able to take action against abuses. Following the final reports and the verdict of the Midden-Nederland court, I will personally discuss the measures to be taken from the community of Jehovah’s Witnesses themselves.” – English translation [non-authorized version]

A full copy of the letter appears below:

As part of the court application to stop the publication of the academic report the Jehovah’s Witnesses submitted an “Expert Opinion” prepared by Holly Folk, Massimo Introvigne, and J. Gordon Melton. The opinion, written in English, stated in the opening paragraph:

“We have been requested by the law firm of Mr. Shane Brady, representing the “Christian Congregation of Jehovah’s Witnesses in the Netherlands”, to examine the report “Sexual Abuse and Willingness to Report Within the Community of Jehovah’s Witnesses,” authored by Kees van den Bos, Marie-Jeanne Schiffelers, Michèlle Bal, Hilke Grootelaar, Isa Bertram and Amarins Jansma, with the cooperation of Stans de Haas, and commissioned by the Research and Documentation Centre of the Ministry of Justice and Safety (Utrecht, December 2019: hereinafter “the Report”), and to comment on it based on our experience of several decades in the study of minority religions and the Jehovah’s Witnesses.”

The expert opinion, as used by Jehovah’s Witnesses, is interesting in that the authors define the word ‘apostates’ as a “technical term not implying value judgment” as used “by some sociologists”. (par. 11.)

A finding from the authors of the expert opinion highlight a complete lack of understanding about the structure of the Jehovah’s Witnesses organisation at the most basic level, that of a congregation. The authors state:

“It is also worth noting that the Jehovah’s Witnesses do not sponsor or provide any activities that separate children from their parents or otherwise take custody of children.” (par. 24.)

Jehovah’s Witnesses do indeed sponsor and provide activities that separate children from their parents. Examples of this are congregation field service, child mentoring programs, personal bible studies, Kingdom Hall cleaning, volunteer construction work, and even in the area of Scripturally-based discipline. 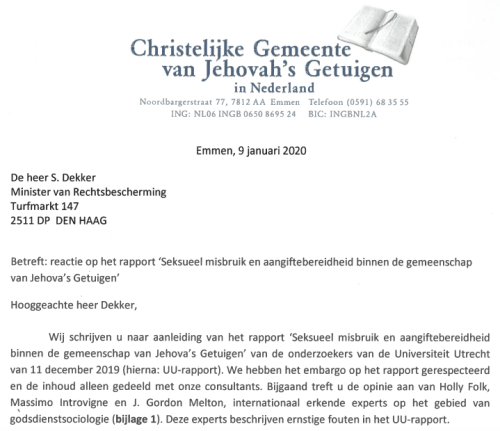 On 14 November 2018, Australian-based barristers David Bennett AC, QC and James Gibson presented to Watchtower Australia and the Jehovah’s Witnesses organisation their commissioned review and opinion on the findings and recommendations of the Australian Royal Commission into Institutional Responses to Child Sexual Abuse as it related to Jehovah’s Witnesses.

The report was used by the ‘Christian Congregation of Jehovah’s Witnesses in the Netherlands’.

Legal Report on the Royal Commission into Jehovah’s Witnessess (pdf) 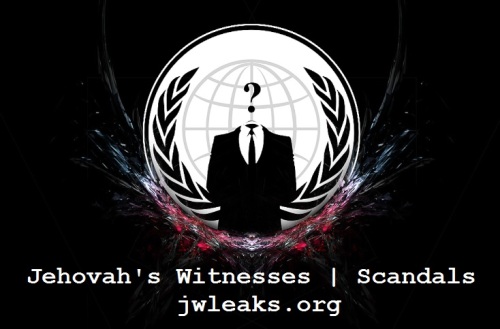